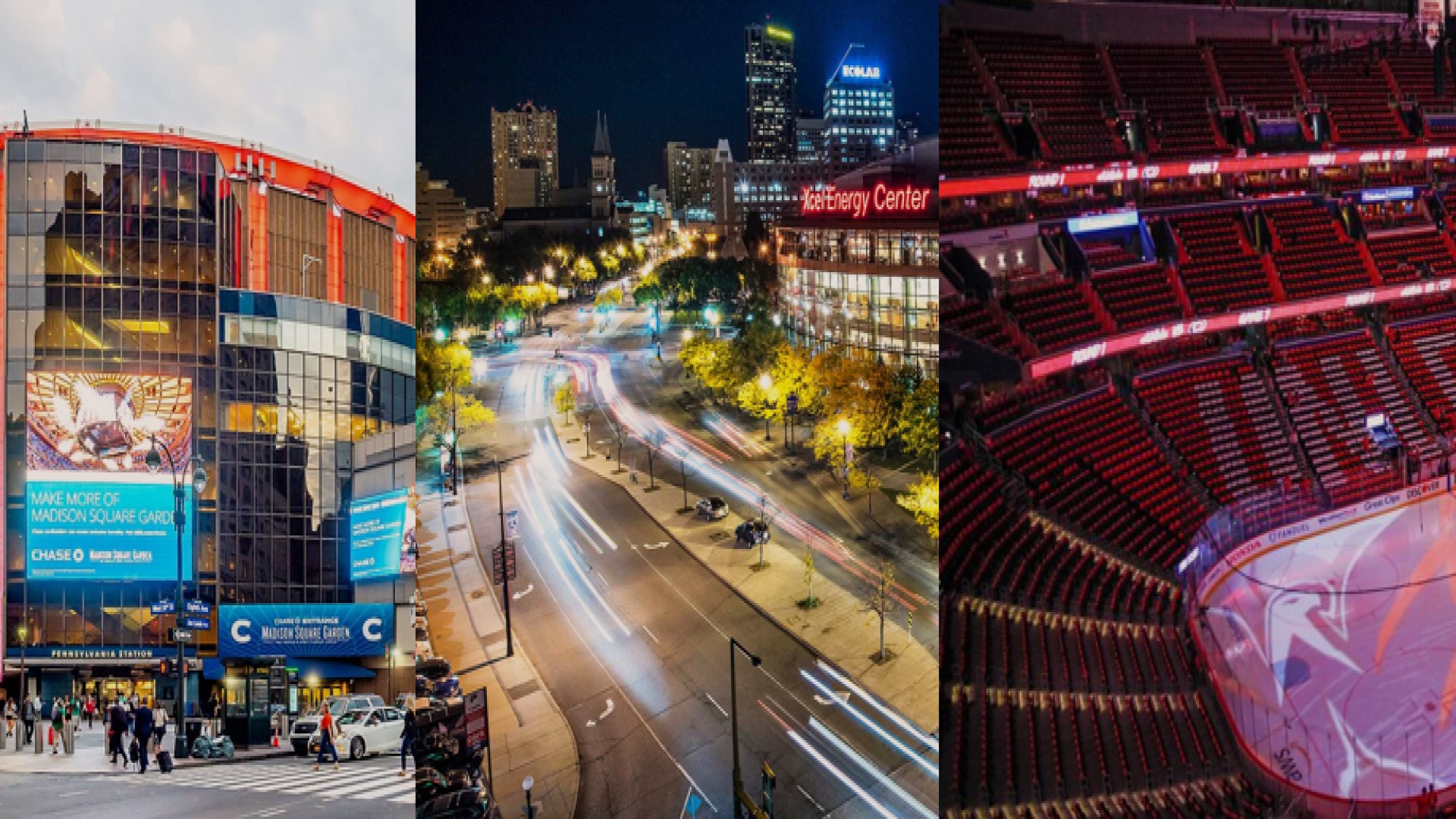 Sportblis presents you with the ranking of the best NHL Arenas. We all know that the game of hockey requires adequate facility maintenance as well as fans’ attendance to spice up the outcome of sports events.  No doubts, the game is better enjoyed while sitting at the stands rather than watching from the television.

With this in mind, many NHL teams have worked towards producing a better fan experience by ensuring that their Arena meets up with certain standards that will enhance viewers’ comfortability.

The multi-purpose arena, which opened officially in September 2000, is home to the Minnesota Wild of the NHL. It was named after its official local supporter, Xcel Energy, which is owned by the city of Saint Paul.

The ice rink at the arena holds a capacity of up to 18,064 (2000-2012) before its reconstruction in 2012. Hence, its official capacity shrank back to 17,954 with four spectator levels including one suite level and three general seating levels.

Till date, the arena remains one of the best fields in the NHL, despite the factors of ageing. Its fan-friendly environment makes it a favourite for Hockey lovers. Do you know?… It took an approximate sum of US$170 million to construct the Xcel Energy Center.

Located in San Jose, California, with a capacity of 17,562, the SAP Center has the lowest capacity in the indoor arena. With its cosy framework, it turns out to be a hotspot among hockey fans.

Indeed, the narrow structure of the arena allows spectators a more comfortable close-up view of the gameplay. Formally opened in 1993 and occupied by the San Jose Sharks, it took approximately $162.5 million ($318 million in 2019 dollars) to construct the arena.

The Amalie Arena serves as the home venue for the NHL’s Tampa Bay Lightning. Among hockey lovers, it’s a perfect ground that promises an unforgettable game experience.

Hence, fans will have a fun-filled escapade watching Tampa Bay in motion from the fascinating interior arrangements. The ground, which opened in 1996, has a massive capacity of 19,092 and an estimated construction cost of US$139 million ($240 million in 2019 dollars). 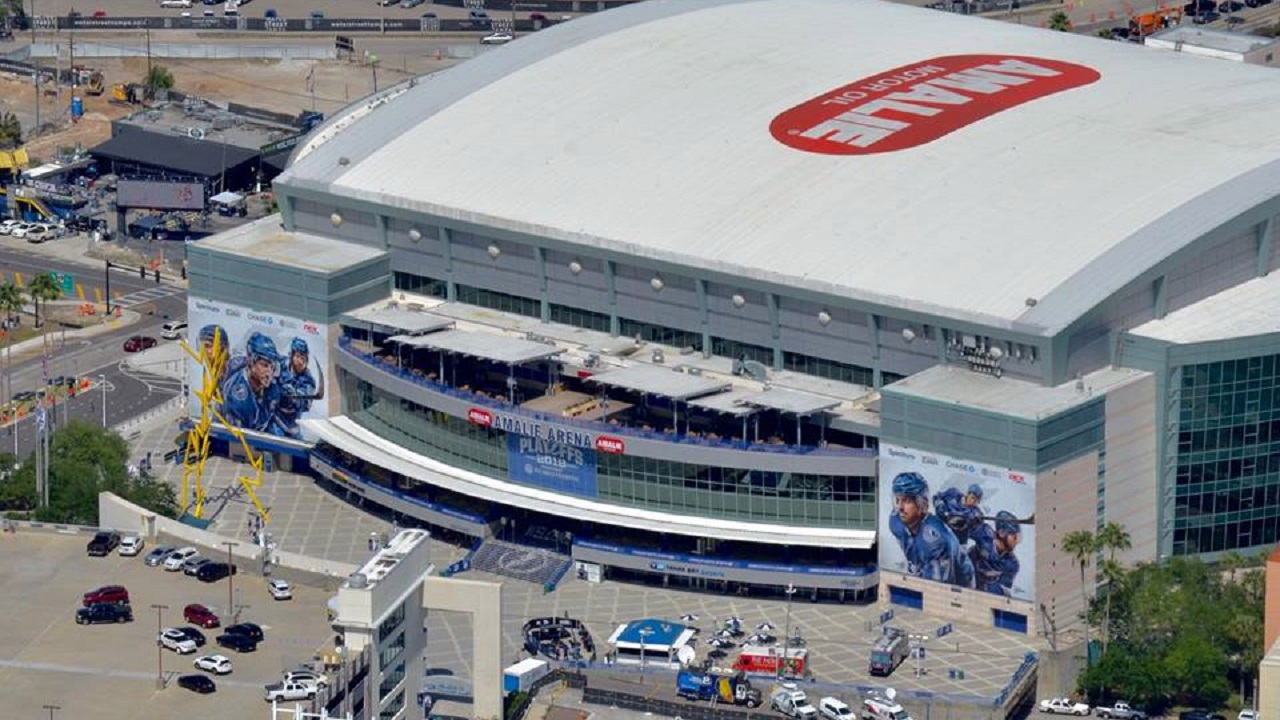 The intense cheering from thousands of fans after the anthem and even during gameplay is one of the thrilling experiences at the United Center. When it comes to motivation, the Chicago Blackhawks fans do not disappoint. Their constant roaring gives you the chill that leaves you with a long-lasting euphoria.

The indoor arena, which has a capacity of 19,717, is home to the NHL’s Chicago Blackhawks. Initially, known as the Chicago Stadium after its construction in 1994, the ground has hosted many interesting NHL games over time.

Do you know?… It took an approximate sum of $175 million ($302 million in 2019 dollars) to complete the erection of the United Center.

The multi-purpose arena in downtown Vancouver, built on 800 Griffiths way, acts as the home ground for the NHL’s Vancouver Canucks.

Designed as a replacement for the Pacific Coliseum, the Rogers Arena’s hockey rink has a capacity of 19,700 (2003–present). Also, it took approximately CA$160 million ($249 million in 2018 dollars) for the erection of Rogers Arena.

Seeing a hockey game at the Capital One Arena is really an excellent arm-giving experience. The energetic feeling of the crowd is addictive in the middle of extreme ongoing games and vigour. Since it opened in 1997 at a construction cost of $290 million, it has been one of the biggest attractions for hockey fans.

It also plays a vital role in the growth of the city of Washington, as it is an industry hotspot for visitors and residents. The stadium that houses the Washington Capitals of the NHL has an 18,593 seating capacity in its ice rink. 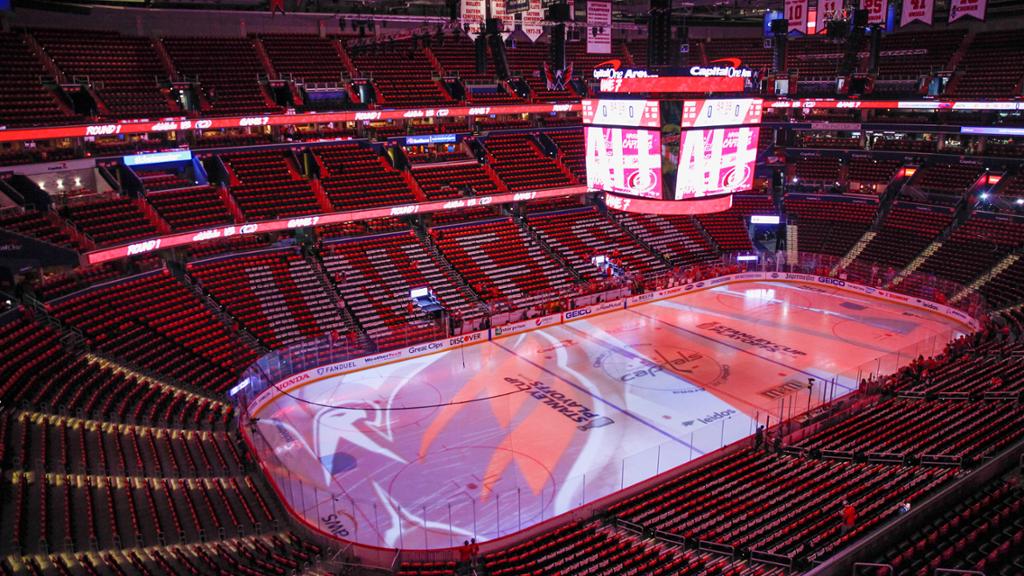 With its sleek and futuristic design, Scotiabank Arena lives up to its tremendous success. The arena is a multi-purpose ground in Canada and home to the NHL Maple Leafs of Toronto. Officially founded in 1999, the Scotiabank Arena holds a seating capacity of 18,800 (20,270 with standing room) for hockey games.

Also, it cost about CA$265 million ($381 million in 2018 dollars) to construct the arena. As of 2020, Maple Leafs Sports & Entertainment Ltd owns and runs the multifunctional stadium in Toronto, Ontario.

YOU MAY LIKE:  Why do NHL Players get paid less than NBA, NFL, MLB?

Some major factors that lure hockey fans and non-fans to the Jackets in motion are the inexpensive price of the ticket and the availability of various menus. Besides, the Nationwide Arena remains one of the most popular hockey grounds in the NHL.

The multifunctional arena was designed as a spectrum alternative and opened in 1996. Its construction cost was $210 million. Having a hockey ice rink capacity of about 19,306, the ground is home to the Philadelphia Flyers.

Do you know?… The arena has a design that guarantees spectators a comfortable view. Hence, many fans regard it as one of the best arenas in the NHL.

The stunning view of Roger’s building and facilities is spectacular enough to entice fans who love to watch the Edmonton Oilers in motion. The indoor arena was opened in September 2016 after three years of construction. Like many other renowned arenas, Rogers Place’s ice rink has a capacity of around 18,500.

Do you know?… The first hockey game that was played at the Oilers’ arena took place on the 24th day of September 2016.

Moreso, the arena is owned by the City of Edmonton, while the Oilers Entertainment Corporation monitors its daily service. Also, the hockey ground was constructed with a whopping sum of CA$480 million ($499 million in 2018 dollars).

Constructed in 1996 with the sum of $144 million, Bridgestone Arena is also a multifunctional venue in downtown Nashville. With its beautiful exterior design, the arena has a seating capacity of 17,159 in its rink.

Also, it is home to the NHL’s Predators in Nashville. No doubts, the arena provides spectators with a cheerful experience that leaves a lasting impression on fans.

The T-Mobile Arena which is home to the Vegas Golden Knights has a capacity of 17,500 in its ice rink. After spending a construction cost of $375 million, the arena was officially opened in April 2016. Because players voted T-Mobile Arena for having the most fantastic ambience, we have included it our Best NHL Arenas Ranking.

In a word, MSG in the United States is one of the well-known multifunctional fields. Located in Manhattan, New York City and opened in February 1968, the arena has a seating capacity of 18,006. Of course, its peculiar exterior appearance is one of the major reasons fans confidently match into the arena without hesitation. 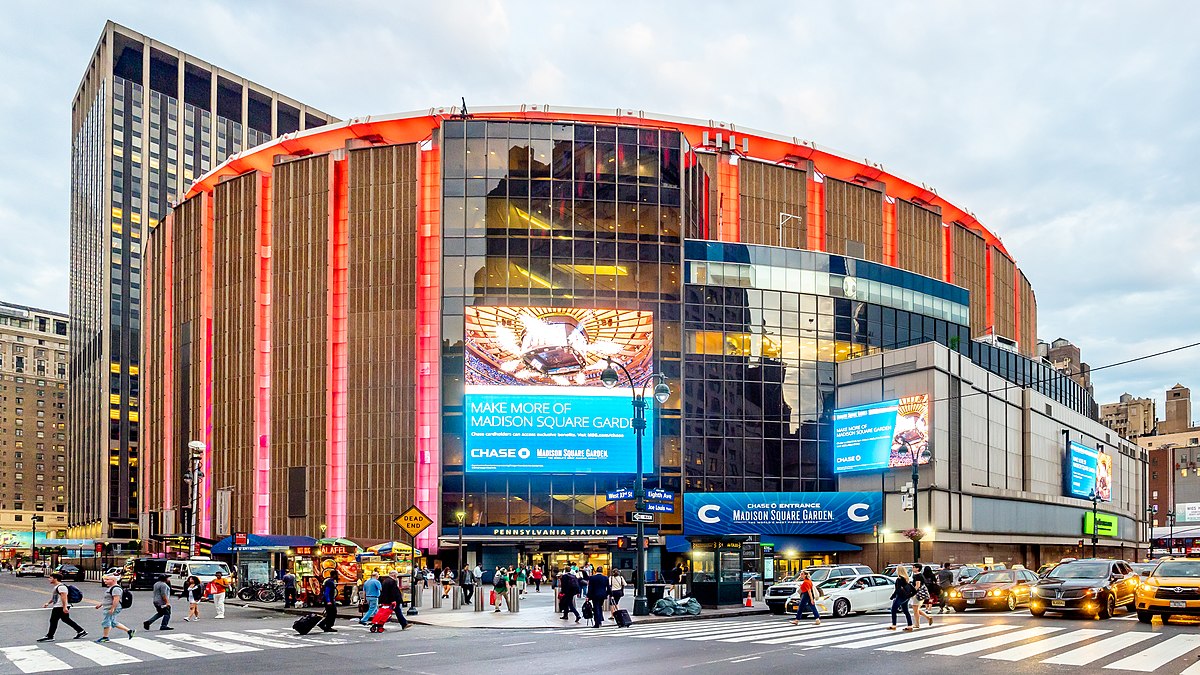 Do you know?… It cost $123 million for the arena to be constructed, while its renovation in 1991 cost about $200 million. When valued in 2020 we realised that the construction cost of the arena could measure up to approximately $1.19 billion. Lastly, the hockey ground is home to the New York Rangers and owned by The Madison Square Garden Company.

The KeyBank Center is a multifunctional indoor arena located in downtown Buffalo, New York. It is the largest indoor arena in Western New York with a capacity of 19,070.

The arena was mainly built in 1996 when it replaced its now-demolished Memorial Auditorium. Perhaps you didn’t know that the construction of KeyBank Center cost $127.5 million (approximately $208 million in 2019 dollars).

The structure, characteristics and respectable atmosphere of Bell MTS’s fans distinguish it from any other arena in the NHL. Home Team supporters often shower their first-time guests with so much hospitality, which brings a positive influence to their game experience.

Based in Winnipeg, Manitoba, with a seating capacity of 15,321, our team has placed Bell MTS Place as the number one arena on our Best NHL Arenas Ranking.

Certainly, every arena must meet up to the functional requirement of providing a great viewer experience and comfort. However, our ranking shows that some hockey team has done an extra job in building a more befitting arena suitable for an enjoyable hockey game.

Having gone through our Best NHL Arenas Ranking, which hockey grounds do you think is missing in our list. Kindly leave a comment about your thoughts in the section below. Lastly, if you find anything that seems inappropriate in our article, do well to contact us. 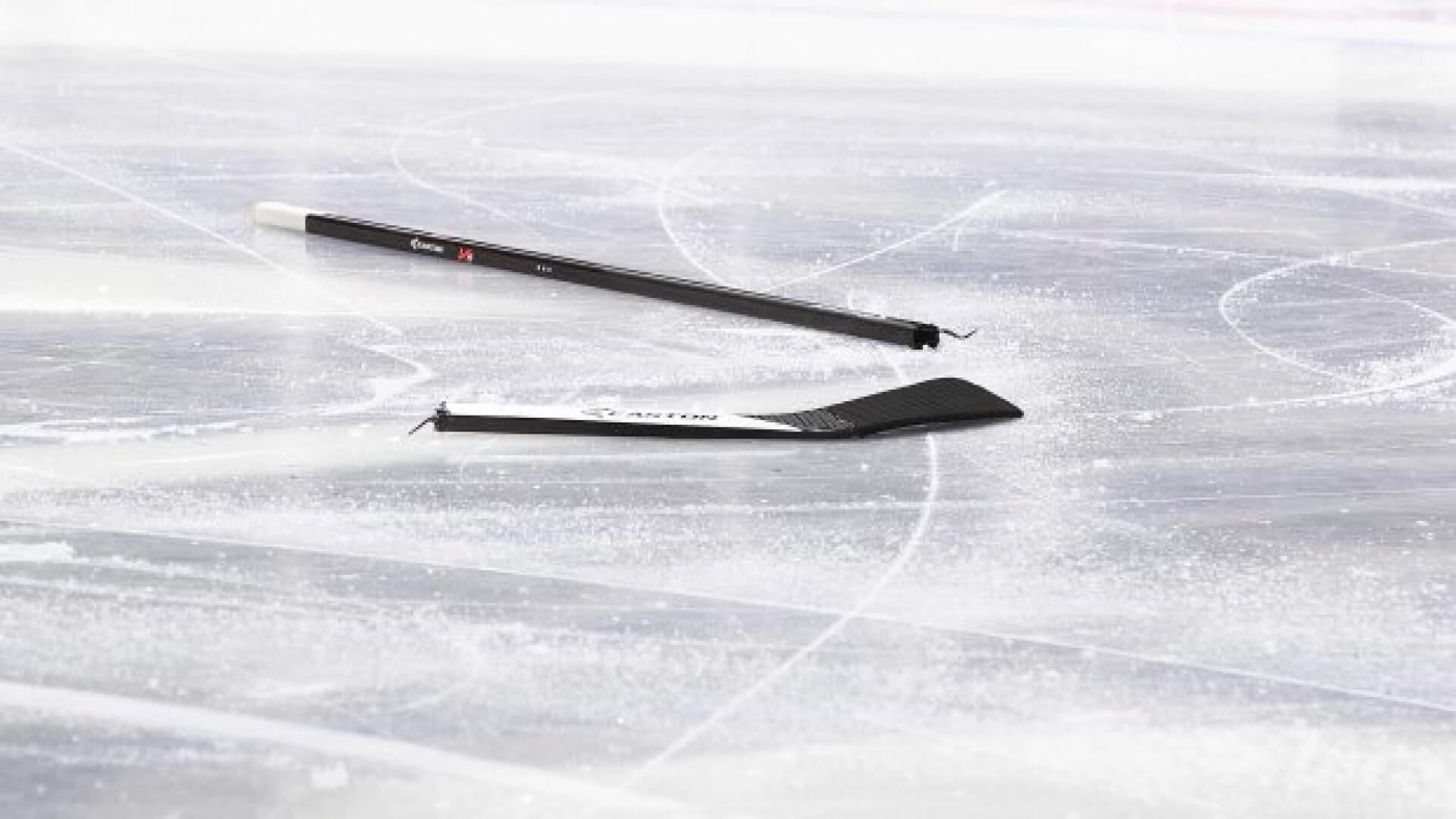 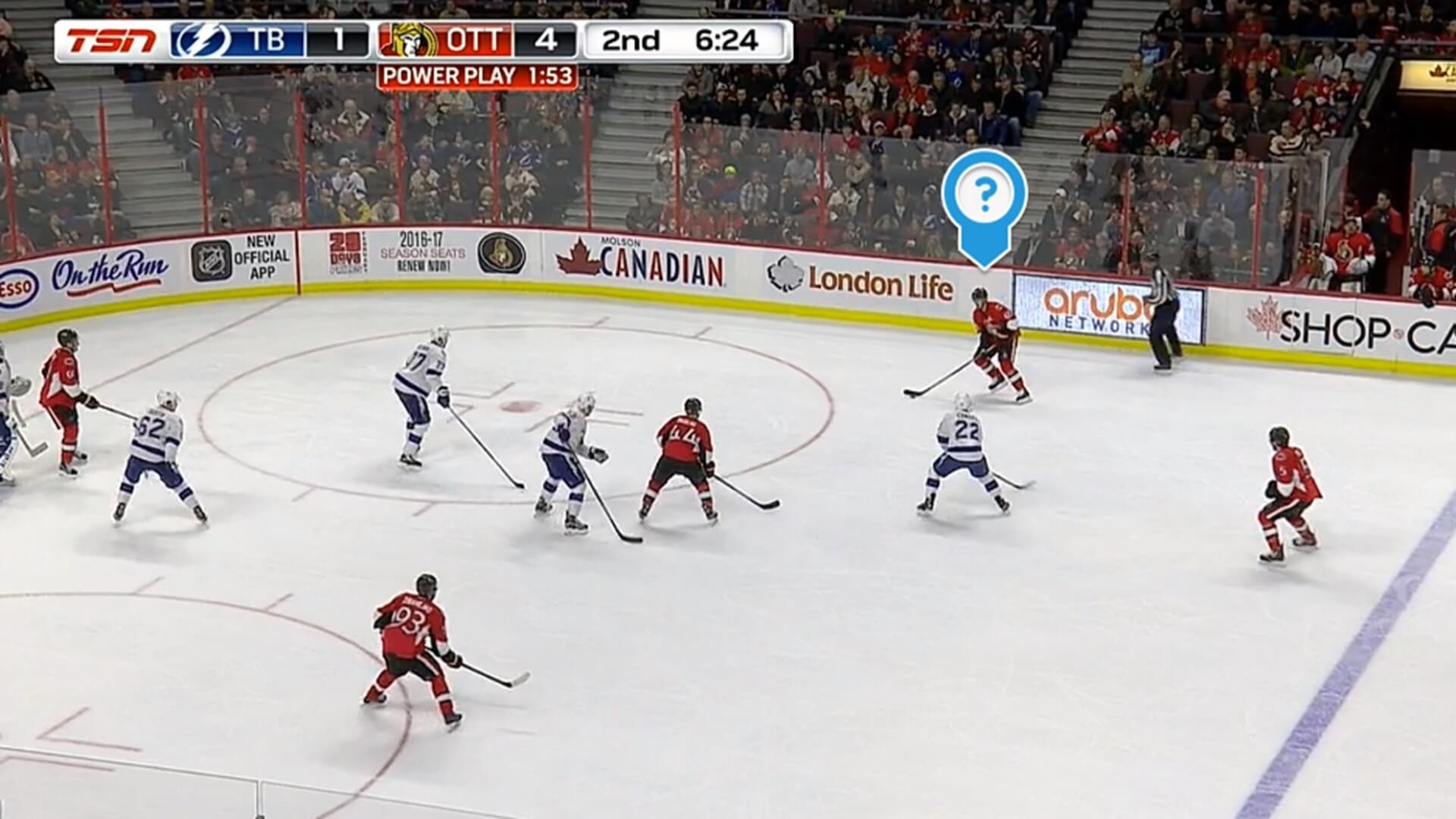 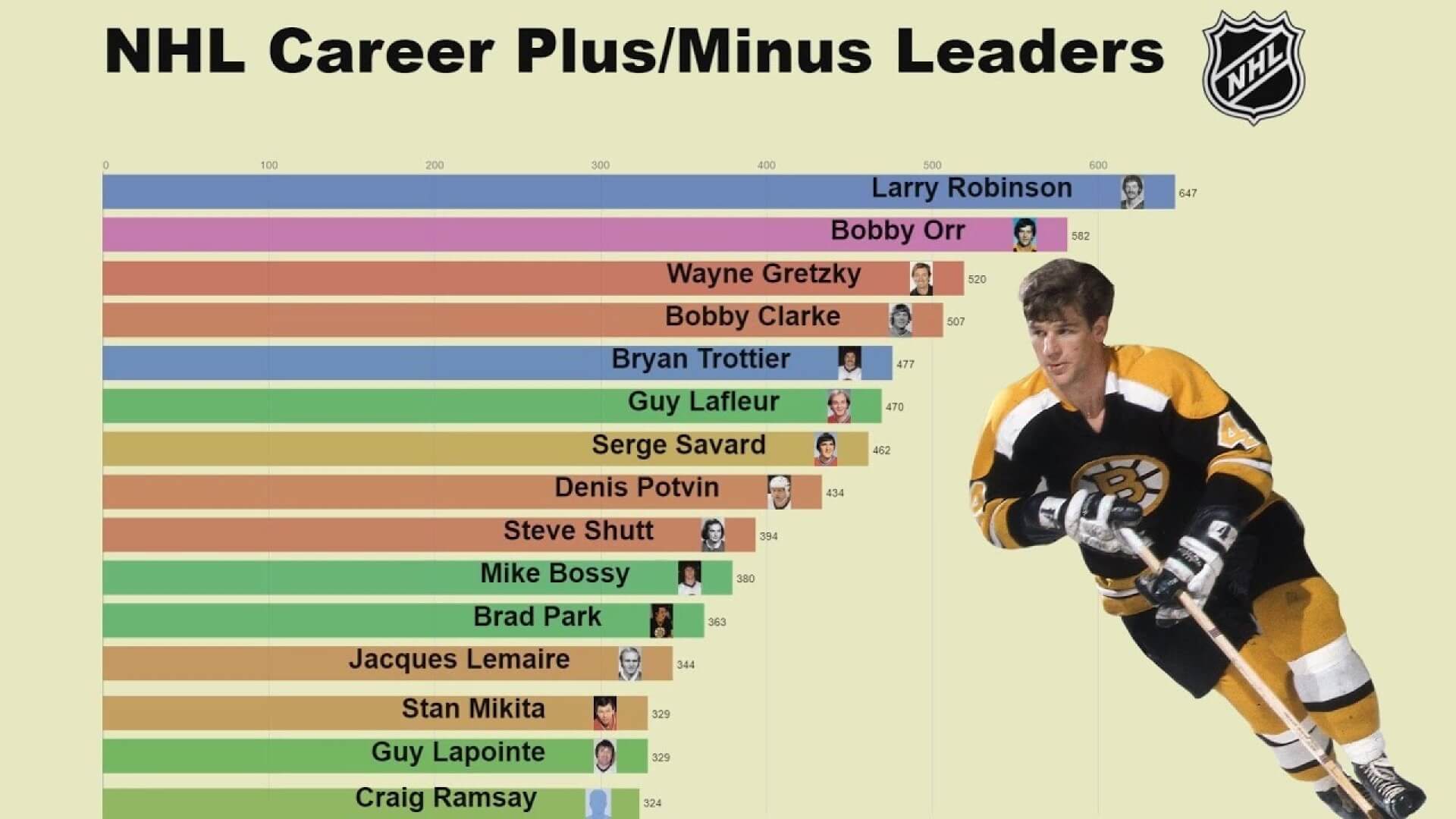